Situated in a landlocked region between Thailand, China, Myanmar and Vietnam, and the northerly neglected neighbor of much richer and more popular Thailand, Laos is just about as beautiful a place you could imagine without a beach. That, and full of the most genuinely good people you’ll meet in Asia.

The best journeys start with strangers…

This being my first time North of this particular border, I was happy to find the Lao people to be some of the most welcoming of any country I have traveled to. This discovery was significant, considering the precarious position the country and its people were put in by my country (the US) during the decade long US/ Vietnam War. For this reason, the warmness I felt left an even stronger impression on me than I would have felt otherwise.

So, it was through some of these new friendships made during a solo adventure to Laos, that I discovered one of the most beautiful hidden gems in Asia:

I was told about Vang Vieng by a group of Lao 20 somethings I befriended one night, at a local Vientiane bar, while trying to keep up with their outrageously heavy drinking of Beerlao, the local beer of Laos.

The local drinking tradition, as it would seem, involves sitting around listening to Lao dance music, the whole group taking a drink each time someone decides to “cheer” someone else. So, out of a group of maybe 12, that’s about every 3 seconds. And they love to “cheers” their new foreign friends. All. Night. Long. To the untrained eye it must have appeared like a group of less-than sane people trying to drink each other to death. I’d love to film this behavior and watch it at 10x speed, it must be hysterical.

Take caution if you ever drink with Lao people, they should be studied by teams of scientists for their capability to drink at rates and for periods of time not possible with other people…

Bar stories aside, at some point during this experience, I was invited to go to Vang Vieng the following day. Not able to quite grasp what was being asked, but understanding it was an invitation of some sort (Vang Vieng sounds more like “Wing Wing” in Lao), a bit of googling led me to some amazing photos of what could only be described as Thailand’s Ko Phi Phi, but without a beach. Not being the type to decline new adventures, I agreed.

Vang Vieng lies about a 4-hour drive north from the capital of Vientiane, which itself sits on the Mekong River on the border with Thailand. I tagged along in a small convoy with my new Lao friends.

I have been to some sketchy parts of the world, but the road to Vang Vieng was one of the most treacherous I have seen.

The road itself was in terrible shape, and absolutely ZERO road rules are observed in Laos, beyond the typical “My bus is bigger than your motorbike” rules common in Asia. In addition to being shaken to the point of near concussion from the potholes, I witnessed two potentially life-ending wrecks on the way there. I am sure someone died, but nobody seemed to care. Life is sometimes cheap in this part of the world.

If you go, certainly don’t rent a car. I would take the bus, as buses rule the roads in Southeast Asia. You can find local routes and tickets below.

Arriving in Vang Vieng was exactly as I pictured it: Tall limestone cliffs and fields, all a shade of green rarely seen outside of this part of the world. It felt like I had just stepped into the opening scene of Jurassic Park when the dinosaurs make their first appearance, but with entirely different music. And the best part: It has for the most part been unscathed by the heavy tourism it would have in say, Thailand, with one exception.

The Korean tourist groups seem to have found the place ONLY for the little riverboat trips and off-roading courses. I was lucky in that I came with locals, who knew how to avoid the crowds, which was easy due to the small sub-economy in place catering only to the particular interests of the Koreans, which kept them sequestered. Nothing against Koreans, I like Koreans. It’s large tour groups I despise.

There are many small hotels in Vang Vieng, which sit directly on the small river, many that don’t, and all are very affordable. You won’t find Hilton or 4 Seasons here. I would recommend something with a great view of the mountains, at a minimum if you can afford to. 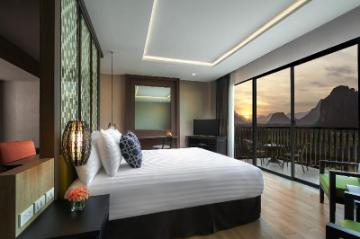 A gorgeous boutique hotel on the river, with views of the mountains from your balcony at sunset. Great pool and bar area as well. 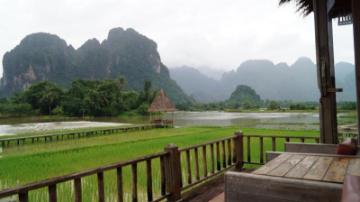 Located in a rice field on the West side of the river, this boutique village consists of a series of private hut style lodgings (with A/C).

The only way to gain entry to the serene rice fields pictured above is if you are a guest. I was not a guest, but I will be the next time I go. 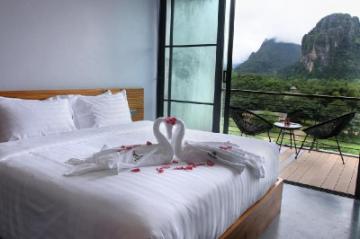 One of the more upscale stays, this hotel is also located on the riverside, near the southern end of town.

Great poolside bar and restaurant, and a great view of the sunset over the
mountains.

The town is full of small restaurants, little bars, massage shops, and tour shops. At the time I visited (September 2018) it lacked cheesy souvenir shops and other notable indications of over-tourism. That was a pleasant development.

As far as activities go, there is plenty to do. Getting to and from the various activity sites, I would suggest a Tuk Tuk, rent a bike or motorbike, or even an ATV for the day. The ATV’s might be the best option, as they are allowed anywhere, and can quickly traverse the terrible roads when flooded, not to mention a hell of a lot of fun.

Small 2 to 3-person riverboats (canoes with motors) give tours up and down the river, all day long, but busiest during sunrise and sunset. This will last around 30 minutes and is a great way to see the surrounding mountains from a clear point of view. I would bet that longer trips are negotiable if desired.

Visit Blue Lagoon… the far one

One of the most famous attractions here is the Blue Lagoons, sections of the creek that pool up nicely to make for a great swimming hole. The water is crystal clear, hence the name. There are actually three of these: One is closest to town (which attracts the tour groups) and two are a bit further out, clearly the better option if you can get to them. Best during the dry season.

If you can’t find transport, or you weren’t lucky enough to come with locals, speak to one of the tour stand guys, or even your hotel clerk. Someone will help you get there.

Hike to the Top of a Mountain

Without a doubt, the best view of the Vang Vieng mountains is from the top.

There are a few different mountains to choose from, most taking anywhere from 1 to 3 hours to reach the top, and the photo opportunity is unreal.

There are a number of caves surrounding Vang Vieng, the most famous of which is home to a reclining Buddha. These are a bit of a trip outside the town and will require at least a half-day to do. During the rainy season, these can be full of water and can be explored via a tube. Arrange via any of the tour stands in town.

Vang Vieng was once a famous stop for backpackers, visiting mostly to go party tubing down the river. The Lao government cracked down on this due to a few alcohol-related deaths, but you can still hop on a Tuk Tuk and head out of town to enjoy a few hours tubing on the river. There are a few riverside bars along the routes for some food and drink stops. Arrange via any of the tour stands in town.

In addition to hiking the mountains, a few different rock-climbing operations offer packages for half and full-day rock climbing outings. Also arranged via the tour stands.

There are a few upscale (but comparatively cheap) hotels right on the river, which have riverside bars perfect to enjoy a cocktail and watch the sun set over the mountains. Stay in one mentioned above for the best time.

Watch the Sunrise or Sunset from a Hot Air Balloon

Now, I must admit I was not able to do this, but you can see how amazing the sunrise must be from one of the many hot air balloons offering sunrise and sunset views. The mountains are full of the jungle mist in the morning, and seeing it from above is something that, if within your budget,, you have to do.

This is the sole reason I will return here one day. You must book in advance, especially as the popularity of this town grows.

Vang Vieng is such a hidden gem in my mind, that I feel a bit guilty sharing my experience in the unlikely chance it leads to even more tourists visiting. Easily one of the most beautiful places in Asia, and unspoiled due to the historical difficulty getting there, I would advise making a trip there if you’re in Laos.

The town and region will certainly lose its luster when the access becomes much easier for the hoards of tourists that are sure to overrun it with the arrival of rail access from China.

Tips from a Local

The 40 Minute Travel Guru's goal is to provide insider information, tips and tricks to make your experience travelling the countries covered as easy and enjoyable as possible. Not a travel blog, we seek to share the lessons, insights and resources found over years of travelling with other veteran and aspiring travelers to help guide you on your way.

Where to Stay in Singapore

Japan: An Insider’s Guide for the Savvy Traveler

Free for a limited time!

Where to Stay in Singapore

Where to Stay in Tokyo: Insider Tips

Thailand: An Insider’s Guide for the Savvy Traveler

Free for a limited time!